Our humble beginning in the year 2000 and journey so far in:

The year saw us enter new domain of cab-service in Hyderabad. In the backdrop of app-based taxi service getting increasingly popular over the last few years, we thought of coming up with a more versatile and easier-to-use app that would have greater acceptability to both, the driver and the rider. With this view in mind, we entered an altogether new arena of app-based cab service and christened it Wakuk – ‘ride with me’ in Marshallese language. Wakuk is the first Taxi-service that promises to provide 24-hour surge-free fixed rate with higher returns to owner/driver while at the same time providing more savings to the rider. Consequently, we launched www.wakuk.com containing functionalities similar to those of Uber and Lyft with a subscription model.

Wakuk
A ride haling App with no surge pricing and with a subscription model with a focus on service providers and consumers.

The year saw modest scale of activities that included relaunching www.mddemocracy.com and initiation of work on www.ridetheway.com. We also launched www.sendwithme.com with four teenage entrepreneurs.

Stashdeal
An App which provides vendors to offer discounts to consumers in real time.

We built Individual Apps for over a dozen elected officials, two currently active are:

Raaheela Ahmed
is an engagement tool for a local elected official to maintain contact with her constituency.

We built a conceptual design of News App for the Presidential Campaign 2016 and shared with both key contacts of Democratic National Committee and Republican National Committee. Began working on www.xcater.com and completed in 2018. We rebuilt www.mpConnect.in a responsive design for the citizens of India to engage their elected officials.

In the year, 2015, we built two incredible Web-based Apps, viz

The year proved to be a hectic one. The Company brought out a unique app (mpConnect) that created a platform for interaction between the citizens of India with their elected representatives, like MPs and MLAs. Another App UniCaster was developed that was primarily a communication and engagement measuring tool for educational institutions, local governments and others. The activities undertaken during the year are summed up as follows.

Developed an App mpConnect (www.mpconnect.in) to Connect Ciitizens with Elected Officials – This App was made for voters of India

Developed an App UniCaster, A communication & engagement measuring tool for educational institutions, local governments, celebrities, campaigns and individuals
It does the following:

Our productivity this year was fairly low while we were taking stock of huge losses starting the year 2010. It took us three years more to get a feel-good mood although we continued working with a scale-down team and operations.

During the year the Company built up half-a-dozen Facebook applications. We streamlined several products and shut many of them down. The relevant source code was opened and shared with several State Legislators. We provided active assistance to three young contestants win their Primaries. The Company developed online/digital strategy for these teenagers who were School Board candidates. Further, we also mentored and assisted three entrepreneurs to signup customers and enhance their products.

The year saw modest scale of activities that included relaunching www.mddemocracy.com, and initiation of work on www.ridetheway.com. We also launched www.sendwithme.com with four teenage entrepreneurs.

We provided active assistance to 30 elected officials/candidates in their web presence and helped them in devising strategies for social media. We put together their digital strategies. The company also focussed on iPhone applications where we launched several applications, including one specifically for Maryland voters. This application helped the voters locate their polling stations and verify their voter registration and absentee ballot status. The year will also be known for transferring ownership of Digitsec to Waqas Nazir and for closing ezCampaigns business. The source code and client-list of the latter was passed on to whoever sought the source code.

The year 2009 would be remembered in the annals of the Company’s history for induction in www.StateDemocracy.com of a seasoned entrepreneur, Frank Islam as Chairman to lead expansion efforts. The major accomplishments are summed up hereunder.

The Company meanwhile picked up speed and started gaining good traction in the US and elsewhere. The inclusion of our name in the list of finalists for Greater Washington’s Minority Business Leaders by the Washington Business Journal was a major achievement for us. During the year, the Company revamped and launched a number of websites giving added features and fresh lease of life to them. Further, HometownAnnapolis.com ran a story on www.GolfFlyover.com where the Company was the technology partner in mapping over 14,000 golf courses in the US. Some of the foremost achievements of the year and the media coverage we got are listed in the following lines.

We filed taxes for the year 2006 indicating revenue generation of more than $ 5 million. The profit, however, was not in commensuration to the business done. This was primarily because of factors like heavy investment of long-term nature, bonus and equity payments, etc. The year 2007 saw revamping of several websites and launching of few more. V-Empower, Inc. secured the distinction of achieving a growth of more than 9,000 per cent over a period of five years. It was adjudged the fastest growing technology company (ranked No. 1) amongst the top 50 companies as formally announced by Maryland Minority Research and Development Initiative MMRDI. It proved to be a major boost to the Company’s image.

The company filed taxes for the year 2005. It excelled in terms of revenue during the previous year by achieving more than 300 per cent as compared to its immediate past. The company however lacked in profitability, and incurred losses. The losses were obviously on account of heavy investment in infrastructure and product development. During the year 2006, the Company focussed more on reaching out to new clients. It was under this strategy, V-Empower, Inc. took the initiative to help many non-profitable assignments both, in the US and in India. It was a feather in the cap of the Company’s website (www.indiademocracy.org) to have secured No 1 ranking from Alexa in June amongst the political websites in India. The other activities of significance are enumerated below.

The financial report for the previous year was encouraging enough as the company for the first time made a profit. The revenue for 2004 too indicated a steep increase, crossing the threshold of 1 million dollar. It did motivate us a lot and gave us reasons for working with greater enthusiasm and energy. This focus during the year had been more on building-up of infrastructure and product development. Some of the products we came up with, have been detailed below. Further, we continued to receive press-coverage and media attention, especially in India. It has overall been a satisfactory experience.

The year 2004 proved to be a hectic one with Company’s activities increasing many folds. We signed up 1st Consulting/Staff Augmentation Contract with Microsoft, Seattle. The financial report for the preceding year revealed a steady increase in revenue and a marginal rise in losses. The year also saw shifting of V-Empower, Inc.’s office to the new premises at Dana Chambers in Hyderabad. With the flurry of political activities and national elections in the US and in India, our company launched several websites for many candidates and political parties. We built most of the technology for Governor Howard Dean who was running for the Democratic Nomination for the US President. We also built the first ever political party website in India www.joincongress.com that was launched by the then-President of the Congress Party, Sonia Gandhi. We were covered widely by the media in the US and in India.

The year saw for the first time a revenue generation by the Company. Though it was a modest one, it did kindle hope of better performance in the future. The losses that we suffered during the previous year were sizeable but not totally unexpected. We learnt a lesson or two to steer the company in the right direction. It is, however, noteworthy that the Company meanwhile caught the attention of the media and renowned newspapers both in the US and in India.

The third year of the Company was very fulfilling one as we expanded www.statedemocrcy.com in the US and launched an App for Indian citizens to connect with their elected officials by the erstwhile Chief Minister of Andhra Pradesh. We did the following in 2002

The journey picked up speed during this year. It was for the first time that we filed our company taxes for the preceding year and opened a formal bank account. The year also saw the launching of several websites. The progress was slow, but nevertheless satisfactory.

Four Co-Founders, Shukoor Ahmed, Abdul Rahman Ahmed, Abdul Hannan Ahmed and Abdus Sayeed Ahmed had a brainstorming session about starting a cab company that would deploy the latest dispatching technology, make the drivers own the car and provide enhanced experiences to the consumers. Cab/Taxi industry was reportedly notorious in the mid-nineties and some of those who lived during the time would share horrible experiences with Taxi and Auto-drivers. We eventually fulfilled our dream of launching a company despite the fact that all of us were first-time entrepreneurs and our families and parents never seriously explored opportunities to start their own business. We took this journey with very little support from our families in the beginning and did not have to look back. 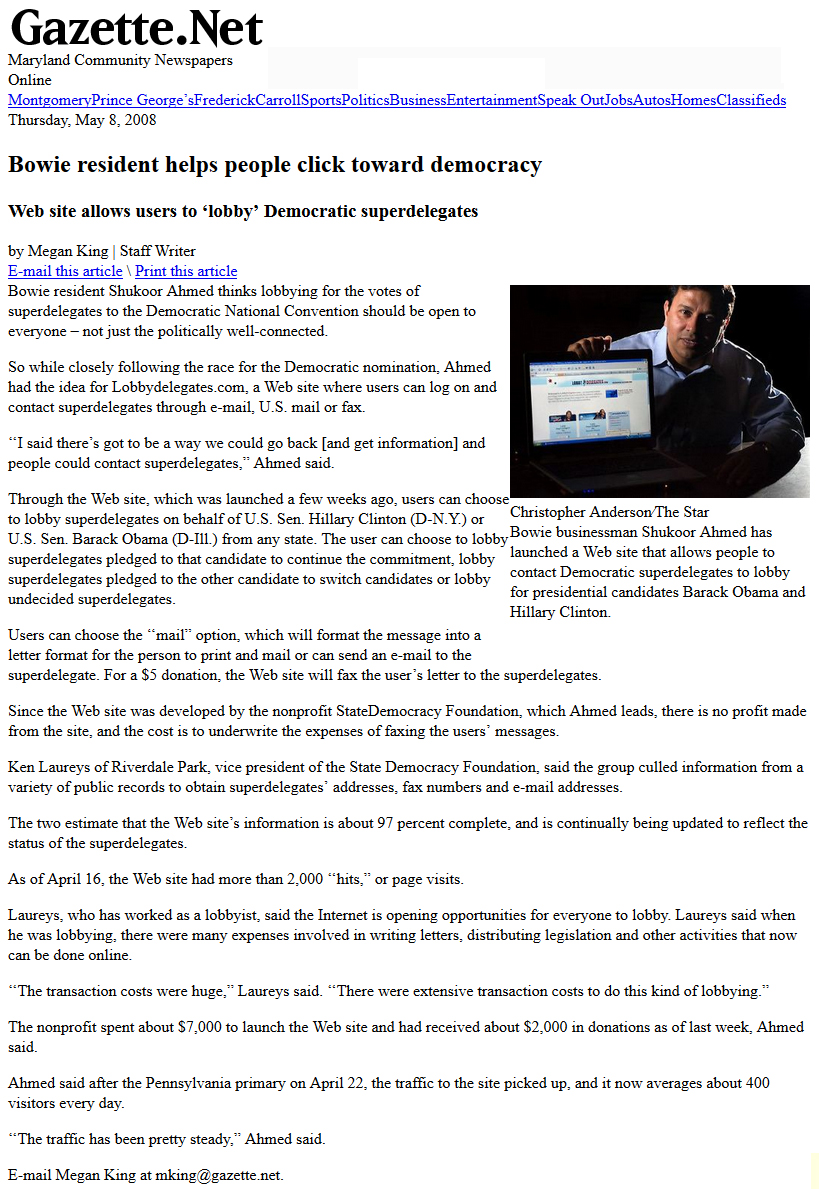